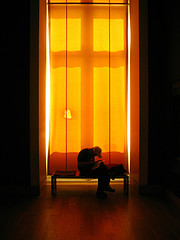 Imagine that you love someone so much that you would do anything to be with that person for all eternity. But you watch that person make decision after decision that draws him away from you. What can you do to show how deep your love is? You give things - events - of extraordinary beauty. You show him ways of how life should be - better than the way his life is now. You even give step-by-step, how-to instruction on what it takes to be with you. But he still doesn't see that you love him so greatly. And he is not making any changes in his life to try to reconcile. You get frustrated. You try tough-love ... consequences for his actions. It hurts you to have to do it, but the separation between the two of you hurts more. In fact, you would rather die than spend your life apart from him.
Then it strikes you - that's exactly the message you need to convey, before it's too late.
"I love you so much that I would rather give my own life away than to face it without you."

His life continues to spin out of control. More and more, day by day, hie is blind to how you feel.
Until one day, it happens.
The one precious to you has hit rock-bottom. HIs future - his very life - depends on how he responds. He needs help, now more than he ever has. But he needs more than what he can get from his family; more than sexual pleasure, more than a high, more than a bottle can give him.

He's heard that YOU can give him what he needs. But dare he - can he - believe it?
"I've died so that you can have life."
"What's that supposed to mean?" he thinks. "No one gives a damn about me. Who in their right mind would? I'm one of the lowest of the lowest people on earth."
"I love you," you tell him.
"If you love me, then why did you allow all this sh*t to happen? You say you love me, but I just don't see it."
"I died for you."
He gives you a look that says, "Yeah. Right. And the Tooth Fairy lives next door to Santa Claus."
He turns his back on you.
But you still love him. Even though it tears you apart inside. You love him as much as the very day you created him. You continue to woo him. But he never softens his heart to your call.
Finally, the day comes when his life on earth is over, and he begins eternity. But he never knew you, even though you unfailingly loved him.
Eternity. He could have had it all ... the fellowship with you in paradise. Splendid, magnificent beyond anyone's wildest imagination. You chose the nails so he could have this. You endured the cross and showed him you would rather die the worst possible death than to live without him.

But he chose otherwise, and in doing so, condemned himself to eternity in hell. Eternity separated from the one who loved him all along.
He will never, ever enjoy your presence. But even though the powers of hell can separate him from your presence, your love for him hasn't changed.
Oh, how it must break your heart to love someone so deeply and know that he will be separated you for eternity.
at 1:31 PM No comments: