The end of my story

You may be wondering why I am starting my post with "The End". That's because the topic chosen for the week by Topical Blogger bvaliant4him is "The end of my story."

For many, talking about the end of their story equates to pondering when and how they might die. It's a common topic of discussion, really. No one knows for sure the hour of his or her final breath, but for many, there is a defining moment when life changed. You became a new person, so to speak, and you vowed never to return to what you used to be.

Although the event at "the end of my story" was over 20 years ago, I remember it very clearly. I won't go into detail, except that I felt much like the Eleanor in my previous post - insignificant and invisible.  But what I will share is that the course my life was on could have had some very serious repercussions, had I continued in that dirction.

But my course changed. The end of my story ushered in a new beginning in my life.

Up until that time in my life, God was someone to be afraid of, because He made the decision whether or not to make good things happen in your life. Jesus was kind of like a cousin or uncle that I knew of and only vaguely remembered from a family gathering when I was very young. And the Holy Spirit was ... well, I'm not really sure what the Holy Spirit was.

But at that defining moment in my life, God became very real to me. Words were spoken from an audio cassette tape, by someone that I had never had the privilege of meeting. Those words changed my insignificance to value; my invisible-ness, dignity. I was told that I have something of worth to give, because I was worthy of receiving something where the giver expected nothing in return.

I realized at that moment that I had been given a new life. I wasn't sure what that meant, but I knew that it was from God. I wanted more of this new life. My story was over. This was the beginning of God's story for my life.


Therefore, if anyone is in Christ, he is a new creation;

the old has gone, the new has come!

What is it like to live in the absence of love? To go through life without even a glimmer of hope for anything? A life where you do nothing more than exist?

More than 40 years ago The Beatles sang of a woman who seems to have fit that profile - Eleanor Rigby. The repercussions of Eleanor's life of intensely cruel loneliness were that no one noticed her. Late in the song we hear the poignant words, "Eleanor Rigby, died in the church and was buried along with her name. Nobody came."

Funerals are nearly always sad occasions. A funeral attended by no one but the clergyman and the funeral director has its own distinct sadness about it. Imagine, a memorial service for someone who was so estranged from the world that not a single person's life was impacted. A graveside service for woman who died long before her body ceased to function. Her existence was nothing more than that - Existence.

When we think of the forgotten people of the world, we often think of the poor, the elderly, the frail. But what makes this "existence syndrome" so peculiar is that it knows no boundaries. The Eleanor Rigbys of the world can be hard-working, healthy 20-somethings, or any other class of people. Truth be told, there was once a time when I felt I could have been mistaken for Miss Eleanor.

Ahh, look at all the lonely people.

Life didn't have to end this way, Eleanor. You may have felt insignificant in life. You may have asked "Who am I that God should think of me?" Perhaps you may have thought that God didn't think you mattered at all.

If only you could have seen that God created you to do more than just exist. If only you had believed - even just a tiny bit - that God knows you, inside and out, much like the master craftsman knows even the most intricate detail of his signature masterpiece. If only you believed that the masterpiece was you!

And now, Eleanor, you stand in the presence of the One who created you. Did you know that He made you just a little lower than those magnificent heavenly beings that you see about you?

Lift your eyes, Eleanor, and look at His face. Do you recognize Him? Does your heart, your soul, your entire being dance when your gaze meets His? Are you experiencing uncontainable joy, perhaps for the very first time in your existence?

Is your joy tainted, wondering where this had been all of your life?

If only you just believed.

You made all the delicate, inner parts of my body,

and knit me together in my mother's womb.

Thank you for making me so wonderfully complex!

Your workmanship is marvelous - how well I know it.

You watched me as I was  being formed in utter seclusion,

as I was woven together in the dark of the womb.

You saw me before I was born.

Every day of my life was recorded in your book.

Every moment was laid out

before a single day had passed.

This week our group's blog topic is "If the world was somehow sucked into a blackhole and entered an alternate universe, what would your ideal vision of that universe be?"

To me, any "ideal alternate universe" would be heaven. As Chris said in a blog post once, "This life here (on earth) is really just the starting point; a training ground for when we get to heaven."  Every now and then I can't help but wonder what heaven will be like ...

Here are some random questions on that topic. I'm sure that the answers to many of these questions will be quite serendipitous.

This week's Topical Blog is on the subject of always learning. To learn is "to gain knowledge or skill from study, instruction or experience."

Experience - that's a good one! It's been said that experience is the best teacher. Who hasn't had an experience that he hasn't learned something from? Simple things, such as don't wear shorts going down a metal slide in the heat of summer. That you should put enough postage on the envelope when you mail your bills two days before the due date. That changing the oil in your car is important. That you should be very cautious when asking for "spicy" food at a Chinese food restaurant. That you can't get a sealed bottle of water past security at the airport, unless it is three ounces or less. Beware of the train robbers at Knott's Berry Farm (that's how I met my husband)!

Just as effective as learning from our own experience is learning from the experiences of someone else. For example, I learned that getting drunk at a party makes you do stupid things you would never do sober. I learned that important files on a computer should have a back-up copy. That adjustable rate mortgages weren't necessarily a good idea.

The Bible is full of lessons to be learned from the experiences of other people. Adam and Eve's failure to obey God's command teaches us that our sins have consequences. Abraham and Sarah learned that God is faithful in keeping His covenant. Late in Genesis, Joseph learned that there are people who try to kill our dreams, and quite often they are the people who are closest to us. We learn from Solomon in the book of Ecclesiastes that living for this world leads to emptiness.

And there are good things that we can learn from people in the Bible as well. The Samaritan woman that Jesus encountered at the well brings us the lesson that Jesus knows everything about us, but doesn't hold it against us. The lesson of the woman who is caught in the act of adultery and is about to be stoned to death by her accusers is that there is no condemnation in Christ Jesus. He doesn't scold us, asking, "Why did you go and do that, you idiot?" but rather, he tells us, "Go, and sin no more."

There are many, many more things we learn through the experiences of others that are recorded in the Bible. What are some of the lessons you have learned? 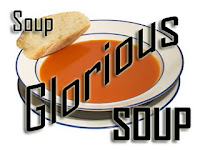 My husband would never say this to my face, but I make a terrible housewife. I run kicking and screaming from anything related to the field of "domestic engineering." I don't like to do housework. As for cooking? You might say that when I cook, it doesn't matter if it comes from a box or not - it's usually Old Testament cuisine. "Burnt Offerings." So much so, that when when we were buying our house ten years ago, our insurance agent would not sell us a homeowner's policy unless we had a fire hydrant in our front yard. (OK, not true. But we really do have a fire hydrant about 30 feet from my kitchen window!)

One of my most memorable creative cuisinery attempts was home made soup. As I remember, it was vegetable soup. I was reheating some leftovers, and decided to have a chat with someone on the computer. It wasn't long before my leftover soup burned and became one with the pan.

Retelling the incident makes me ponder ... If I woke up tomorrow and I had a whole bucket full of soup, would it be right to offer it unto the Lord as a burnt offering? ...

No, what God wants from us can be summed up in two statements. Jesus tells us to:
Pretty simple. Love God, and love others. All other rules come from those two basics.

I admit, it's not always easy to keep those two commandments. We fail. A lot. And sometimes those failures are disastrous, like burnt soup that is worthy of being thrown away, pan and all. But God will never throw us away. Nothing can separate us from His love, and when we confess our sins to God, He is faithful to forgive us and cleanse us from all unrighteousness!

While God loves us deeply and is involved in every part of our lives, He is not so much concerned about what we feed ourselves physically, but more that our spiritual hunger is satisfied. The best I can offer you is burnt soup. Jesus offers himself - the Bread of Life.
at 8:34 PM 2 comments: