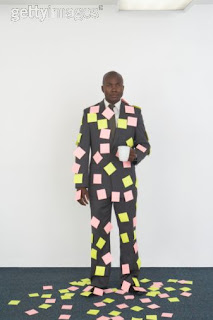 Imagine your life in terms of a time line, made up of yellow and pink Post-It notes.  The yellow post-it's represent the experiences, events, and people that have had a positive impact in your life.  things such as being born, activities in school,  special recognition you have received, your first date, graduation from college, the family trip to Yosemite, winning the lottery...  People, such as friends, teachers, parents, heroes, a motivational speaker, your spouse, your kids...   The pink post-its represent the negative experiences - being held back in second grade, your teachers saying you won't amount to anything, getting arrested (especially if it was for something that did not start out as a yellow post-it), a bad relationship, the death of a close relative, losing your home to foreclosure...

It's fun to talk about the yellow post-it notes that are on our time lines.  For most, the yellow's outnumber the pink ones.  But let's take some time to talk about the pinks for a bit.  Look closely - some of those can be a nasty shade of pink, and some are a more pastel hue, aren't they?  In many instances, that is true.  But look at that faded pink one - the one from when you were in the 10th grade and your best friend since grade school stole your boyfriend of two weeks - it was a deep pink at the time.  Just as deep as the one when your place of employment closed down a few years ago.  But when you look back at the BFF/BF incident, it's now faded.  Why is that?

Because you let go of the hurt.

Letting go does not mean that the pink post-it experience never happened.  It doesn't mean there is never at least a teeny bit of negative emotion when you look back.  Letting go of past hurts means ... well, let's be obvious here.  Letting go means letting go.  You are no longer holding on to it, dwelling upon it, re-living the pain over and over.  You have learned that going through the hurt was a necessary process, a prerequisite to growing into the person God wants you to become.

Let's take another look at our time lines.  Look especially at what is after the pink post-it's.  What do you see?  More yellow post-it's!  The pink's don't last forever!  There is a saying, "When you are going through hell, don't stop!"  God does not want to leave us in the wilderness forever.  In fact, it is not long after the worst of the pinks where you see the brightest of yellows.  If not for the times where God is disciplining us, shaping us, molding us, we would not fully enjoy the blessings that God gives us when we live according to His purpose for our lives.

When the apostle Paul wrote his letter to the Christians in Rome, one of the things he told them was "In all things God works for the good of those who love him, who have been called according to his purpose."  That statement wasn't just for the first-century Romans; it goes for you and me as well.

How do we see this?  In the case of the BFF/BF experience, XBF breaks up with your XBFF and he starts dating the head cheerleader.  Years later at your class reunion, XBF and the cheerleader are married.  He's in denial that he's going bald and wears his hair in a bad combover, and she can't stop talking about her latest plastic surgery.

As for the XBFF?  After graduation you let go of the resentment and bitterness that you once held toward her.  The two of you reconnect at the reunion, and later become successful business partners.  The income you have is more than you ever could have made at your job that closed down.  And because you are doing something you love, you have a more fulfilling life than you ever dreamed possible!

So why is it that the baaaad things have to represented by the color pink? Hmmm?

Mary from the Prairie said...

The Post-it Note timeline came from a mentoring exercise, where you look at your past to see where God is preparing you for your future. (Also, when you buy the multi-color pack of post-its for the exercise, there are more yellow post-its than pink in the package.)