Being a Good Servant

I am part of a small but budding blogging group, where each week we take turns choosing a topic that we all post on. This week's topic is "The Good Servant."

Initially, I was drawn to the story of the Parable of the Talents. That was before Saturday Morning.

*WARNING - THE FOLLOWING IS NOT FOR THE FAINT OF HEART.*

Saturday morning I was in a discussion group where one of the members told of how her sister recently returned from mission work in Uganda. My friend told of a scene that her sister had witnessed, of a child of only one year of age, dying of starvation. This child was being cared for by his five-year-old brother, because the parents had both died. Imagine - a five-year-old, who doesn't really know how to care for himself, taking the responsibility for caring for a child who can barely express his or her needs!

My friend also posted a video of two children, Esther and her older brother Sam, age seven. When the mission crew came upon Esther and Sam, the two children were on the ground, on their bellies. Their bodies showed obvious signs of starvation, and they appeared to have been abandoned. As the missionaries were taking in the sight, wondering what they should do, the children's older sister Jane, only eight years old, came from out of the bush, returning from walking miles to get water to bathe her two younger siblings. Esther and Sam were not only severely malnourished, but they also had polio and could not walk. Jane had to lift Sam to the basin of water, bathe him with whatever soap she had - I'm sure it was not Mr. Bubble - and then lift him out of the water and carry him to a mat where he could dry off. Jane then repeated the process with Esther. (The end of the video tells us that Esther, Sam and Jane are receiving proper care. And Jane is in an environment where she can just be a kid.)

These two accounts tell of the very essence of servanthood. They tell of children - who should be spending their days playing - caring for the basic needs of someone else. Even though they don't necessarily know how to care, they care the best they can.

This makes me take a look at how I viewed "service": Take an idea. Form a committee. Make a plan. Get trained-up. Take a stab at it.

These kids don't have that option. They just serve.
at 9:11 PM 2 comments: Links to this post

What makes your life exciting? 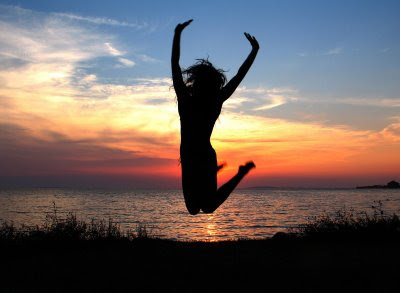 A couple years ago I was part of a group of regular chatters on Crosswalk.com. Like many online friends we all wanted an opportunity to meet and hang out face-to-face. There was just one problem -- Distance. You see, some of us were in different parts of California; others in the group were from Texas, Colorado, North Carolina, New York, and places in between. Meeting over coffee just wasn't practical.

Our opportunity to meet came when the gal from New York accepted an invitation to sing in a festival near Nashville, TN, a once-in-a-lifetime opportunity. We were all excited for her! Not only is she realizing a long-time dream, it was also the perfect chance for some of us to finally hang out in person! Oh, if every day could be as exciting as the trip to Nashville. But time and money is a limited resource, and we can't do exciting things like that every day.

So how can we keep excitement, this feeling of lively and cheerful joy, in our lives?

Do what gives you joy! This might sound like an obvious answer. But how often do we actually participate in things that give us joy? If the sound of a child's laughter gives you joy, then do things that make kids giggle. If you love to do crafts, make time on a regular basis to do so. If you love pets but live in a small apartment, roll around with a friend's dogs until the dog hair is interwoven in your favorite shirt.

For me, one thing that gives me joy is spending time in a small group talking about what the Holy Spirit has revealed to us. I have recently connected with a group of wonderful women in a group called "Fuzzy Slippers" that shares that same joy.

The level of excitement in our lives does not have to be "extreme" because most of us don't live "extreme" lives. It's the little things that can give us the day-to-day excitement that we all long for.

What about you? What makes your life exciting?

An Audience of One 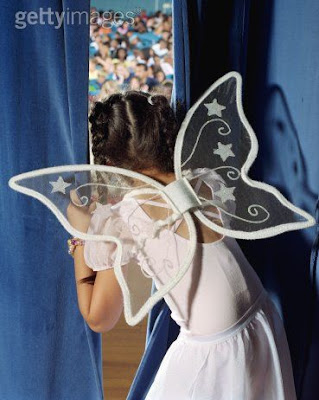 "How many? Is my dad in the audience?"

"But is my DADDY out there?"

"Rebecca! Hurry! Get in your place! Mrs. Weaver is about to pull the curtain!"


When I was in kindergarten my class sang at a PTA meeting. What makes this event stand out in my memory is that there was a VIP in the auditorium, sitting about two rows from the back. When I saw this person I raised my right hand to about my waist and gave a tiny wave. I don't think anyone else on the stage noticed that VIP, but to me my mother was the most important person at McKinley School that night. I don't remember what song the group of not-yet-six-year-olds sang, but I can tell you that I sang loud and proud for my "audience of one."

It has been a few years since I was six. Since that time I've had many different "audiences" that I've tried to please -- teachers, friends, neighbors, strangers, fellow drivers, creditors, bosses, the coworker who received the ChiaPet from me in the office gift exchange -- the list is endless. It would be impossible to try to please everyone all of the time. Unless it pleases everyone that I fail ... but I don't believe that is the case.

The apostle Paul tells us in Colossians 3:23, "Whatever you do, work at it with all your heart as working for the Lord, not for men." If, as William Shakespeare wrote in As You Like It,

All the world's a stage,
And all the men and women merely players:
They have their exits and their entrances;
And one man in his time plays many parts

then let us wake up each morning, peek out from behind the stage curtain and acknowledge our VIP in the audience -- our Heavenly Father, our Audience of One -- and perform to please Him and Him alone. After all, it is His applause that should matter most to us.
at 7:48 PM No comments: Links to this post