Lots and Lots of Birthdays! 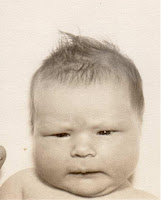 This is the very first picture of me, taken on the day of my birth, October 5 (you figure out the year).  A lot of preparation went forth into my arrival by my parents, without whom the occasion would have never occurred.  They chose a name that had a special meaning - Mary Helen, the same name my mother gave her dolls when she was young.  The name is also after my two grandmothers.  My parents also took special care to prepare a place for me.  Not just a place that would provide safety and shelter.  They prepared a place for me where I could grow surrounded by love, knowing I was the most precious little girl in the whole wide world.

I was joining a family of not only my parents and my big brother, but also grandparents, lots of aunts and uncles, and a handful of cousins.  Everyone in my extended family was joy-filled when they learned of my arrival.  My great-grandparents even made a special trip from the mid-west to see me.  My mom says that my great-grandmother was amazed at how small my hands were!
That was when I was first born.  My mother tells me what she considers a second day of birth.  Here is the story in her own words:

When  you were almost 7 months old, we almost lost you.  You were very ill and went into convulsions, quit breathing twice, and had to be hospitalized for a week.  If you look on the inside of your ankles, you will see a small scar - it looks kind of like a division sign (a line with a dot on each side) where they put an IV into your vein to help revive you. The scar is the one you told your nana is from when a motorcycle came around the corner and hit you in the front yard.  Not true, but an extremely imaginative story to explain the scars.

Despite tests, they  never  were able to diagnose what the cause of your illness was.  I only know that God answered a lot of prayers when he let you live.  I always looked on that day, May 2, 1963, as the day you were born for a second time; the day God told me that he did really trust me to take care of his gift.

I've celebrated many October 5th's and May 2's since those very first ones.  But I have yet to  experience the Ultimate Birthday.  That will be when I get to heaven.  But before someone gets to heaven there has to be a "spiritual birthday."  Allow me to explain.
One night an old man named Nicodemus was having a conversation with Jesus, when the subject of the kingdom of  God came up.  No surprise there.  But what was surprising was what Jesus had to say about it:  "I tell you the truth, no one can see the kingdom of God unless he is born again."  Of course, Nicodemus was confused.  Certainly an old man such as himself go back into his mother's womb to be born a second time!  Jesus explained to him, "I tell you for certain that before you can get into God's kingdom, you must be born not only by water, but by the Spirit. Humans give life to their children. Yet only God's Spirit can change you into a child of God."  In my case, I was baptized when I was about two months old (after my first physical birth).  But this concept of spiritual birth didn't make sense to me until around 1986.  I now belonged to a family of brothers and sisters, all with God as our heavenly Father.
That's when the preparations for my spiritual home really got underway.  You see, when Jesus was on earth he told the twelve disciples at the Last Supper, "There are many rooms in my Father's house. I wouldn't tell you this, unless it was true. I am going there to prepare a place for each of you. After I have done this, I will come back and take you with me. Then we will be together."  Just as my parents prepared a place for  me before I arrived in this world, a place is being prepared in heaven in anticipation of my arrival, my “second” spiritual birthday.  I will be reunited with grandparents, aunts, uncles, and loved ones that will be there waiting for me.  My great-grandmother will see that my hands have grown considerably over the years.  And I will finally meet my Creator face to face.
That will be the Ultimate Birthday Party!
at 11:16 PM

Awwww! What a precious picture! And such an awesome story to go with it!