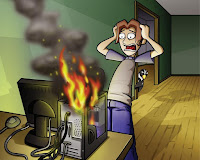 
About ten years ago I was part of a team sent by my company to teach employees how to use an upgraded computer program.  The computers we had been using were very cumbersome, and obsolete to the point where they had to be replaced in order to be upgraded.  As I was learning about this new system, I wanted to try to test its limits.  I tried whatever I could think of to make it crash.  I discovered that no matter what, even if I were able to interrupt the flow of information to the computer for a while, that flow of information could be restored, and things would be back to business as usual.  The fact that the computer’s information pipeline could not be permanently broken was reassuring.  Employees who were not familiar with technology did not have to be afraid of causing the company to implode from a few clicks of the mouse.  Even if they did cause an accidental implosion, all we had to do was call the company’s techno-geeks that run the computer system.  A few minutes later it would be up and running again, good as new.

God’s love for us works the same way.  All of us, in our own way, have tried to test the limits of His love for us.  We do and think things that interrupt our communication with God, perhaps some things where we believed God could not love us again.  Maybe we believed that if we went into a church ever again, the doors would crash down.


The Bible tells us that God’s love for us does not crash.  Even though our fellowship with God can be interrupted, his love for us cannot.  The apostle Paul wrote, “I am absolutely sure that not even death or life can separate us from God's love. Not even angels or demons, the present or the future, or any powers can do that.  Not even the highest places or the lowest, or anything else in all creation can do that. Nothing at all can ever separate us from God's love because of what Christ Jesus our Lord has done.”


That’s right – no matter what we do wrong, God still loves us.  And when we do something wrong and want to make things right again, we tell Him.  By his death on the cross, Jesus made a way for us to bring our relationship back online with God.  If we admit that we have sinned, he will forgive us our sins. He will forgive every wrong thing we have done. He will make us pure, good as new!

Truly grand and I thank God for His unconditional love----always and I thank you for reminding me! :-)