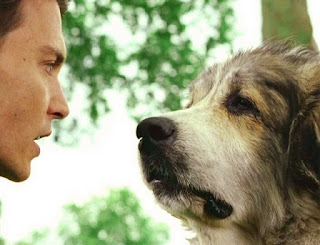 One of my favorite films in recent years is “Finding Neverland,” which tells the story behind the story of Peter Pan. Early in the movie is a scene in which playwright J. M. Barrie is walking with his large dog in the park and has just met the four boys and their mother. The oldest boy asks what Barrie does for a living, and he answers by saying, playfully: "Well, currently, I make my living entertaining princes and their courts with my trained bear, Porthos. If you command your brother Peter to join us, I am willing to give you just such a performance." (Peter has not been playing with his brothers because he is still unable to process their father's death.)

The other boys agree. Barrie sets himself up with his dog in front of the seated family. He faces his dog and says: "I want you to pay particular attention to the teeth. Some unscrupulous trainers will show you a bear whose teeth have all been pulled, while other cowards will force the brute into a muzzle. Only the true master would attempt these tricks without either measure of safety."

Five-year-old Peter is not in the mood to play. Leaning toward his mother, he defiantly says: "Why did you bring me over here for? This is absurd. It's just a dog."

Barrie, who was walking back to Porthos, suddenly turns around. "Just a dog?" he asks. "Just? Porthos dreams of being a bear, and you want to dash those dreams by saying he's 'just a dog'? What a horrible, candle-snuffing word. That's like saying, 'He can't climb that mountain; he's just a man.' Or, 'That's not a diamond; it's just a rock.'" Before turning back to the dog, Barrie gives the boy an appraising look and mutters, "Just."

Peter retorts, skeptically: "Fine then. Turn him into a bear, if you can."

The first time I saw the movie, I cried at that scene.

Why would a scene about a dog imagined to be a dancing bear make me cry? Because like young Peter, I had lost the wonder of being young. I was at a place in my life where I had taken on many adult responsibilities. I had allowed my grown-up challenges and relationships crowd out my sense of adventure. My ability to see the unseen was limited to the outcome of what I could only see before me, and many times I found myself visualizing disastrous results.

I had forgotten what it was like to think as a child thinks, to be brave enough to imagine that I could interact in a world where Pirates and Indians were more than baseball teams, and a young hero named Peter Pan could defend me from all threats, foreign and domestic.

God used His imagination in creation of the world. For example, look at , shaped like a boot about to kick a football. Or at the way God created the giraffe. No other animal walking the earth today looks anything like it (at least not that I’m aware of). And when God created man in His image, He also gave man creative ability, what we call “imagination.”

We can see how the use of imagination honors God all around us, in the words of the Psalms, the response of music and artwork, even in the way we play. Gifts that are used responsibly bring honor to the giver. “God’s gifts and his call are irrevocable.” (Romans 11:29) To snuff out someone’s imagination and dreams is to snuff out the work of the Holy Spirit in our lives.

I always wondered that myself, at what age do we lose or chose to lose the the ability to think like a child or use our imagination playfully? Who says we aren't allowed to? I seem to have more fun in my "old" age when I act childish or better said, youthful. When I attended acting school, one of the very first classes, the teacher told us that a key to inter-acting with others is to think like a child. There are multiple reasons for this, but her main point was to learn to have fun like a child does and everything kinda falls into place.