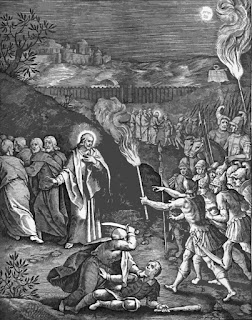 This week's "Topical Blogger" assignment is to write something from the point of view of a character in the Gospel. My chosen character is one of the Roman soldiers who was in the garden of Gethsemane at the time of Jesus' arrest.

So Judas came to the grove, guiding a detachment of soldiers and some officials from the chief priests and Pharisees. - John 18:3

As a member of the Roman armed forces I have taken an oath of allegiance to Rome and to Caesar, to protect the Empire from all threats, foreign and domestic. For as long as I've can remember, there hasn't been any real threat that would require a whole detachment of soldiers to enter into any kind of combat, even that's what we're trained to be ready for.
I've heard of the Jew, the rabbi they call Jesus. He talks of another "kingdom," but that's all he's done - talk. They say that he's worked "miracles," had some interesting teaching, even brought back someone who's been dead for four days.  At least that's what people have said. I didn't believe much of what I heard. And I don't see how that can be a threat to the Empire. But for some reason the Jewish leaders needed a whole detachment of us, about 600 men, to go to arrest this one harmless man. Imagine - one man, with his handful of misfit followers, against 600 of Rome's army. No contest, if you ask me.  I'm not even sure what this Jesus did that was so bad and why we were arresting him in the first place.
But we were giving our marching orders, and so we marched.
One of the rabbi's followers, the one they call Judas, followed by some of the Jewish leaders led us to where Jesus was. I don't know what they expected, because they were carrying weapons themselves, as though a detachment of soldiers wasn't enough.
It was easy to find him, almost as though he were actually waiting for us, right in the middle of the olive grove. There was not even a hint of fear about him. He asked, "Who is it you want?"
"Jesus of Nazareth!"
"I am he."
As he said that, "I am he," the strangest thing happened. It felt as though some force, stronger than anything I had ever felt, pushed us backward, almost knocking us to the ground. This power seemed to come from just those spoken words! How could that be possible?
When we get back on our feet, I've got my sword at the ready, waiting for whatever might come next. But get this - he surrenders! I guess that didn't go over very well with Simon or Peter or whatever his name is, because rushes toward the high priest, running with his sword like a madman. Jesus tried to stop him, telling him to put the sword away, but not before Peter ends up missing the priest but cutting off his servant's ear! I know the servant, too. Malchus. I don't care much for him. Still, he didn't deserve that.
What Jesus does next is another thing that I don't understand. You'd think that he'd show some sort of fear over all that was going on. But no. He goes over to Malchus, puts his hand to the his ear, and heals it. Reattaches it. I mean, it's like nothing ever happened to it. I don't know how he did it. I've never seen anything like it before.
I never gave much thought to what the people in this town have said about Jesus. He seemed to me to be a crackpot of sorts. But now that I actually encountered him, something inside me tells me that I should give him some more thought. Is he a lunatic, or could he really be the Son of God, as some say he claims to be?
at 9:13 PM