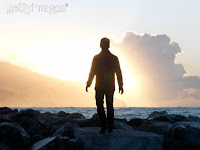 Christmas. It's the time of year that traditionally inspires joy more than any other time of year. In fact, I believe I experienced joy more in December, 2009, than I had in many Christmas seasons in recent memory.

Why so much joy?

Was my life all warm and fuzzy, full of the ear-to-ear-grin Kodak moments with loved ones? Hardly. Our combined income was 23% less in 2009 than in 2008. Hardly a financial bonanza. Not only that, my marriage crumbled as my husband and I came to the painful decision just two weeks before Christmas to separate our lives due to a long-festering issue that neither of us were willing to compromise on. The “D” word that I had once vowed never to speak was now becoming a part of my vocabulary, part of my life. So much for being “nestled all snug in our bed...”

In the midst of the trauma, how could I feel joy?

That night in the fields near Bethlehem some shepherds were guarding their sheep. All at once an angel came down to them from the Lord, and the brightness of the Lord's glory flashed around them. The shepherds were frightened. But the angel said, "Don't be afraid! I have good news for you, which will make everyone happy. - Luke 2:8-10

I wondered what it would have been like, to have been a witness to the multitude of angels breaching the veil that thinly separated heaven and earth, God from humanity. I wondered if the shepherds' quaking in their sandals was calmed at all when they were told, “Do not be afraid ...”


And she brought forth her firstborn son, and wrapped him in swaddling clothes, and laid him in a manger; because there was no room for them in the inn. - Luke 2:6

I wondered at two weary travelers who took whatever lodging was available. I wondered if, when they set out on their trek, they had any clue that a stable would be the best of what's left, and would have to do for the birthplace of the Prince of Peace.


For unto us a child is born, unto us a son is given: and the government shall be upon his shoulder: and his name shall be called Wonderful, Counsellor, The mighty God, The everlasting Father, The Prince of Peace. - Isaiah 9:6

I wondered at the baby, who later grew up to become a man. I wondered what the Wonderful Counselor would say to me, to give comfort to me in the midst of my tears. How did he know exactly what I needed to hear, exactly what would give me the courage to move forward?

Behold, a virgin shall be with child, and shall bring forth a son, and they shall call his name Emmanuel, which being interpreted is, God with us. - Matthew 1:23

I wondered at the name Emmanuel – God with us. I wondered why a holy, unblemished God would want to dwell among people who turn their backs to him. I wondered what he thought he would try to prove by doing so.


God loved the people of this world so much that he gave his only Son, so that everyone who has faith in him will have eternal life and never really die. God did not send his Son into the world to condemn its people. He sent him to save them! - John 3:16-17

I wondered what my life would be like if I did not believe in God's saving grace. And I shuddered. I cannot imagine life without joy.

Joy ought not be restricted to one brief season of the year. It should be a way of life. Somehow joy loses its fullness when it is unaccompanied by wonder.

So I wondered why you were so preoccupied recently......This raises many questions, but you can always tell me to mind my own business.